The cod in the Barents Sea is moving northwards and eastwards, says Harald Gjøsæter from Institute of Marine Research. (Photo: Gunnar Sætra/Institute for Marine Research)

The Barents Sea cod stock is growing and spreading northwards and eastwards. Never before have scientists found cod as far north as during this year’s ecosystem mission.

Norwegian and Russian scientists recently concluded this year’s joint ecosystem mission to the Barents Sea. The conclusion is that the cod stock in the Barents Sea has set a new record when it somes to northern distribution.

The cod stock in the Barents Sea is considered to be the largest in the world. The quotas for 2013 will probably be over 900.000 tons.

“The northernmost observations were of rather small amount of fish, but we still see a trend that the main stocks of the North Atlantic cod migrate further north and east than earlier”, mission leader Harald Gjøsæter says to the Institute of Marine Research’s web site.

The reasons for the record distribution are according to the scientists higher sea temperatures and sufficient supply of food. 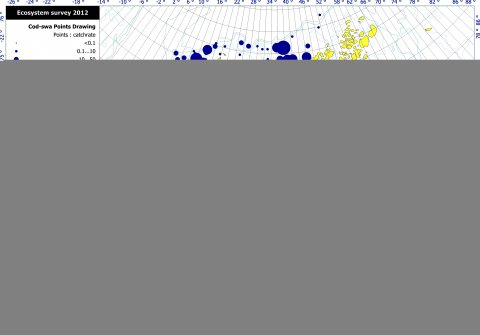 Distribution of cod in the Barents Sea (Ill.: Institute for Marine Research)

The scientists use both trawl and acoustic instruments to map the fish stocks in the Barents Sea, and the studies show that the distribution of cod stocks and the capelin stocks are overlapping each other.

The ecosystem mission in the Barents Sea is a collaboration between the Norwegian Institute of Marine Research and its Russian counterpart PINRO. The two organizations have been cooperating since 1958.

A century and a half ago, Norway was home to roughly three thousand brown bears, the majority of bears in all of Scandinavia. By 1930, the bears were virtually extinct. Decades of aggressive management tactics and bounties had wiped out one of the area’s most iconic species.

Microplastics found in waters off Svalbard

Microplastics, the tiny plastic particles that are accumulating in marine waters and big lakes around the world, are now showing up in the Arctic waters south and southwest of Svalbard, Norway, a new study says.

The Barents region is the exception to an ecological deficit in Europe. But the long-term trend shows a reduction in biocapacity also in the north.