Kolgoyev island in the eastern Barents Sea, far away from everything, is already included in Russia's Arctic border zone development. (Photo: Thomas Nilsen)

Speaking to the expanded collegium of FSB in Moscow on Monday, Vladimir Putin outlined the designated priorities for the future work. FSB is in charge of guarding Russia’s external borders, including the land-border to neighboring Norway and Finland in the northwest as well as coastline borders to the Arctic Ocean.

“As a priority, we must continue the development of border infrastructure in the Arctic region, as well as on the southern strategic direction,” Vladimir Putin told the audience of FSB officers. 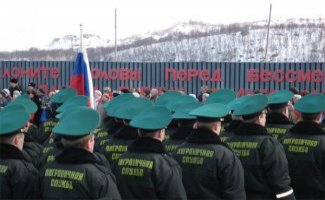 Russia has over the last few years strengthened border infrastructure in remote Arctic locations, as previously reported by BarentsObserver from both the remote Kolgoyev island in the eastern Barents Sea and in Dixon, Russia’s northernmost outpost on mainland Taimyr Peninsula.

The President also called on FSB border guards to work closer with the border infrastructure state agency, Rosgranitsa, and the Migration authorities.

Rosgranitsa is the agency responsible for building and operating the check-points, like Borisoglebsk to Norway and Lotta and Salla to Finnish Lapland.

“Today it is necessary to improve the level of technical equipment of checkpoints to strengthen contacts with Rosgranitsa, the Federal Migration Service,” Putin said.

The call on strengthening Arctic border infrastructure comes less than two weeks after Putin ordered further development of combat personnel of the armed forces in the Arctic region.

On Friday last week, Putin got confirmation from Russia’s Minister of Natural Resources, Sergey Donskoy, that the country will have its Arctic claims ready and submitted to the UN Commission on the Limits of the Continental Shelf (CLCS) by spring 2015.