Finnish border officers carry guns while on patrol in Norway

Terrorism fears, with police and soldiers likely targets, is the reason for the special decision to allow Finnish Border Guards to be armed when on patrol in the normally relaxed town of Kirkenes in Norway’s northeastern corner.

It was on Tuesday this week, two officers from the Finnish Border Guard (Rajavartiolaitos) with clearly visible guns appeared on the central square of Kirkenes together with Norwegian police officers. Locals took part in festivities at the square used as checkpoint for Finnmarksløpet where mushers with dog sledges arrived during the day.

The armed officers also attracted attention while walking through the Russian street-market around the corner from the square.

“I signed the order for the Finnish Border Guard to carry guns,” says Chief of Police in Eastern Finnmark, Ellen Katrine Hætta, when asked by BarentsObserver about the patrolling foreign officers walking the streets of Kirkenes.

She says the armament is based on Norway’s current threat assessment and the decision to arm Norwegian police and “…police personnel, including Finnish border guard on mission in Norway should be armed.”

Rajavartiolaitos is the national security agency responsible for enforcing the security of Finland’s border. Unlike in Norway, where it is the police that is in charge of border control, the Finnish Border Guard is a military organization, subordinate to the Ministry of the Interior.

The officers were armed with a Glock pistol. (Photo: Thomas Nilsen)

It was in November last year Norway’s Ministry of Justice and Public Security allowed police officers to carry guns based on a threat assessment from the Police Security Service (PST).

PST said they have reasons to believe soldiers and police officers are potential targets for terrorists. The decision is not a general armament, but a limited measure as part of the increased risk.

The police in the streets of Norway have historically, as one of few countries in Europe, remained unarmed.

Norway and Finland are both members of the Schengen area, the group of European countries that have abolished border controls between each other. In the high north, border officials from Lapland and Finnmark counties have cooperated for years. 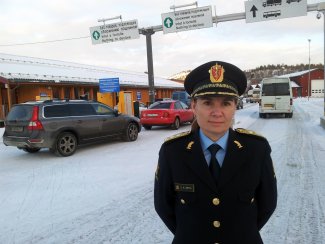 “The Finnish officers are on a Frontex mission and were on duty in the centre of Kirkenes centre together with Norwegian police,” says Ellen Katrine Hætta. She assures they are following the Norwegian police’s weapon instruction while on duty in Kirkenes.

“This is regulated in the Schengen agreement about Frontex officers working in another country’s territory,” explains Chief of Police Ellen Katrine Hætta.