STAVANGER: Statoil has found no commercial wells of oil in the Barents Sea this summer, but politicians and industry are still optimistic that the north will see a boost in petroleum activities.

Industry and municipalities of Northern Norway have the largest stand at the ONS exhibition. 120 exhibitors have teamed up for the Xplore North stand, just across the street from where Norway’s Queen Sonja officially opened the ONS Conference on Monday.

The conference and the exhibition is one of the largest in the world for people tied to the oil and gas industry with some 60,000 participants from 100 countries.

Oil companies and supply industry from around the globe are on display at the exhibition. It was, however, the Xplore North stands that first attracted the attention from Norway’s Prime Minister Erna Solberg when she toured ONS together with Crown Prince Haakon after her speech at the opening session. 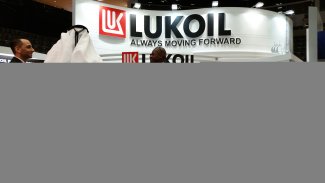 Oil companies from around the world gather at ONS. Russia’s Lukoil is next to the exhibitors from Northern Norway. (Photo: Thomas Nilsen)

Solberg focused on changes in the world’s energy market in her speech, encouraging a shift to cleaner energy sources. “In that context, natural gas is by far the cleanest of the fossil fuels,” the Prime Minister said well aware that half of the petroleum Norway produces is natural gas.

Norway supplies 20 percent of the gas demand in Europe, second only to Russia.

Possible exploration of natural gas from the northernmost parts of the Norwegian Sea and the Barents Sea was also the talking issue among the stakeholders from Northern Norway at ONS.

After Statoil’s somewhat disappointing drilling season in the north with zero commercial findings, the question about how to connect the Barents Region to Norway’s North Sea gas-pipeline system to Europe is a key issue for future petroleum developments in the north.

There are many fields with proven natural gas in the Barents Sea, but little oil so far.

In hope of finding oil, Statoil’s CEO Helge Lund told journalists after his speech that the company is preparing for new series of test drilling in the Barents Sea. Statoil aims at becoming an important actor in Norway’s next licensing round, Lund said.

Norwegian authorities recently gave Statoil a go-ahead to drill the Isfjell prospect supposed to start in October, after the company has finished drilling the Pingvin prospect, the first in the Barents Sea where Russia’s Rosneft participates.