Thumb up for Barents oil

”This will generate value for the Norwegian people for decades,” says Minister of Petroleum and Energy Tord Lien with the thumb up for Arctic drilling as the Goliat platform arrives Hammerfest.

The Norwegian Minister could today see firsthand the giant 64,000-ton Goliat platform to be operated by Eni in the Barents Sea.

Tord Lien says to BarentsObserver that the Goliat field represents the opening of a new era of Norwegian oil production.

When the Goliat field comes to production later this year, it will be the world’s northernmost offshore oil field.

The platform is built in South Korea and arrived outside Hammerfest on Norway’s Arctic Sea coast this weekend after a 63-day voyage onboard ”Dockwise Vanguard” - the world’s largest heavy transport vessel.

The platform is a cylindrical so-called floating, production, storage and offloading (FPSO) facility. In the fjord outside Hammerfest, the deck of the transport vessel will be submerged to a depth of ten metres, enabling the platform to be floated off into the sea. The facility will then float in its own right and five tugboats will take over the work of moving the 170-metre high structure to Ersvika, south-west of Hammerfest, Eni informs.

Following final preparations at Ersvika, the platform will be towed approximately 80 kilometres to the Goliat field location in the Barents Sea.

Goliat is special desinged to withstand strong Arctic wind and low temperatures in the Barents Sea.

Eni’s Goliat prodject is way behind timeline, originally scheduled to be in production in 2013. The project became also much more ecpensive than first estimated due mostly to engineering adjustments at the yard in South Korea.

The final price tag for the Goliat platform is NOK billion (€5,33 billion).

Once in production, the Goliat platform will be manned by about 40 people. The field will be operated from Hammerfest. Recovery reserves are 174 million barrels o foil and production will last for 10 to 15 years.

The platform has a production capacity of 100,000 barrels of oil per day and a storage capacity of one million barrels. 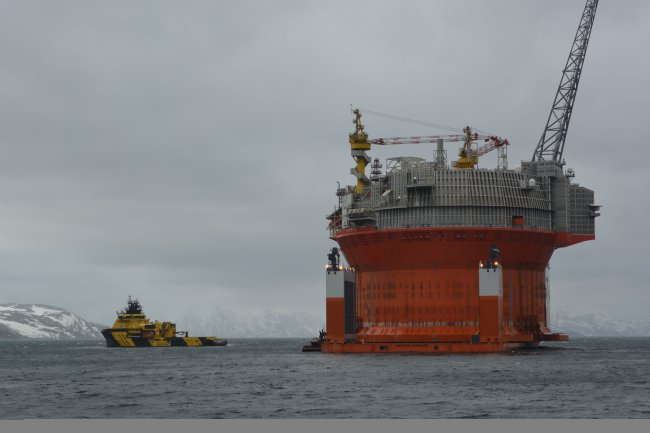 The Goliat platform in the waters outside Hammerfest on Norway’s Barents Sea coast. (Photo: Thomas Nilsen)