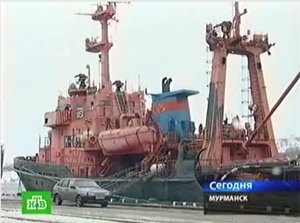 Norwegian authorities at Spitsbergen on 20 May kicked the Russian fishery patrol vessel Mikula out of the Russian port of Barentsburg. The Russians say Norway with its tough reactions against the vessel violated the Paris Treaty of 1920, which regulates international relations at the far northern archipelago.

Norwegian authorities on the other hand argue that the “Mikula”, a ship operated by the Russian State Committee for Fisheries, did not have the necessary permission to enter the port of Barentsburg.

The “Mikula” had been 57 days in the waters around Spitsbergen to inspect Russian trawlers operating in the area, when it on May 19 entered the port of Barentsburg to fuel fresh water. Not long after mooring, a Norwegian helicopter turned up next to the vessel and told it to leave the port, fishery inspector Anatolii Leontyev told RIA Novosti.

Soon after, the Norwegian Coastguard vessel “Nordkapp” turned up in the area, and repeated the Norwegian demand. Then, on 20 May a police delegation headed by Deputy Governor Elisabeth Bjørge Løvold showed up and gave an “ultimatum-like message” to the captain.

The “Mikula” all along refused to leave the port arguing that it was entitled to enter the port according to the Paris Treaty. The vessel still chose to leave Barentsburg on 20 May after having finished fuelling fresh water, and not to “stir tensions”, RIA Novosti reports.

Fishery inspector Leontyev has reported about the incident to the responsible Russian authorities, and Norwegian newspaper Fiskeribladetfiskaren writes that the case over the last days has been the subject for significant diplomatic talks between Norway and Russia.

Deputy Governor Løvold says to NTB that the Russian vessel lacked the necessary diplomatic permission to enter the port. Head of the Norwegian Coast Gyard, Steve Olsen, does not want to comment on the issue to newspaper Fiskeribladetfiskaren and refers to the Foreign Ministry. The adviser on polar affairs in the ministry, Mr. Karsten Klepsvik, on the other hand says the coast guard was not at all involved in the incident.

The Svalbard Treaty of 1920 lays down the supremacy of Norwegian law at the archipelago. At the same time, the Treaty opens up for other countries to engage in industrial activities on the islands. Russia today has a settlement in Barentsburg, and operates a coal mine in the area.

Norway in 1977 unilaterally established a fishery protection zone around the archipelago and argues that it is entitled to include the 200 mile zone in its territorial waters. Russia and a number of other countries do not however acknowledge the Norwegian claim.

Russia has long disputed Norway’s supremacy in the Spitsbergen waters and this winter sent two fishery inspection vessels to the area to help protect Russian interests.