“The Barents cooperation structures are truly among the most efficient organizations of its kind”, Orlov said in this week’s meeting between regional governors and the federal foreign ministry.

“This comprehensive experience serves the attention and adoptation also  from other regions”, the governor added, a press release from the Arkhangelsk regional government reads.

According to Orlov, cross-border cooperation between Northwest Russian and Nordic regions continue “irrespectively of the geopolitical sitation”. 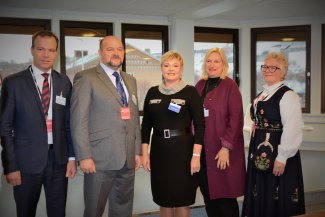 Arkhangelsk Oblast has the last two years chaired the Barents Regional Council, one of the two main pilars in the Barents Cooperation structure. The Barents Region includes a total of 13 territorial units, among them five Russian federal subjects, and stretches from the Norwegian Sea in the west to the Ural mountain in the east.

Governor Orlov has also on previous occasions praised the Barents Cooperation. Speaking to his regional assembly last year, Orlov admitted that that the Arkhangelsk chairmanship of the Regional Council comes in a rather complicated geopolitical period. However, “that should not in any case affect our cooperation in solving common problems,” he added.

“This cooperation is beyond big politics,” Orlov stressed.