More than a dozen navy vessels and submarines sail out from the Kola Peninsula on Tuesday. From the White Sea, a Bulava missile is likely to be launched.

Over the next few days various forces from the Northern fleet including “Admiral Ushakov” torpedo boat, the “Severomorsk” anti-submarine vessel, as well as the “Snezhnogorsk” and “Unga” anti-submarine groupings will attack a group of enemy submarines, a press-statement for Russia’s Northern Fleet reads.

The naval vessels will be supported by anti-submarine planes and helicopters.

The statement says submarines, playing to be the enemy, have already sailed to different secret positions in the Barents Sea. “The crews of the submarines participating in the exercises were tasked with being secretly deployed in the designated areas and attacking a group of surface-water forces,” the statement says. 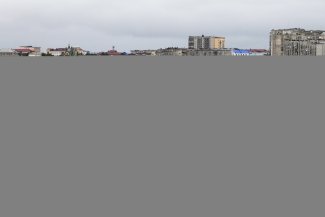 Warships in the Russian Northern fleet’s main base Severomorsk north of Murmansk on the Kola Peninsula. (Photo: Thomas Nilsen)

Amphibious landing ships will deliver divisions of mobile coastal guided missile systems to the exercise area on Sredny Peninsula, a part of the Fishermen Peninsula near Russia’s northern border to Norway.

The exercise will last until weekend, culminating with a range of torpedo and rocket firings from both surface vessels and submarines.

Bulava missile ready for launch
Russia’s war game in the western part of Russia’s sector of the Barents Sea is not the only naval shootings to take place this week. It is expected that the brand new nuclear powered missile submarine “Vladimir Monomakh” will launch a Bulava missile from the White Sea, reports the military newspaper Voyenno-Promyshlenny Kuryer.

The Borey-class submarine sailed out from the naval yard in Severodvinsk Monday.

The naval blog @russianforces reports that an area in the White Sea and an area just west of Novaya Zemlya is closed for flights from Wednesday till Sunday. The White Sea area in question is normally where missile submarine launches, while the closed off area in the Barents Sea could be where the first stage of the Bulava rocket is supposed to crash before the second stage of the missile continues towards the missile range on the Kamchatcka Peninsula in Russia’s Far East.

The launch will, if successful, be first time “Vladimir Monomakh” shoots a Bulava-missile.

Last Saturday, another group of navy vessels from the Northern fleet set sail from Severomorsk towards the New Siberia Islands, where they will establish Russia’s first post-Soviet naval base.

Second naval drill in a month
This week’s exercise comes only one month after Russia’s last drill in the Barents Sea, where two destroyers and several nuclear submarines participated as reported by BarentsObserver.