Despite chill, Norway will pay for Russian military navigation marks

Suspended military contact does not hinder Norway to cash out millions of kroner for safer navigation inside the Northern Fleet’s waters. Seamarks, beacons and buoys will be owned by the navy, according to Per-Einar Fiskebeck and Jarl Tuv with the Norwegian project partner.

The NOK 24 million (€2,88 million) project aimed at improving safety for vessels sailing nuclear waste from the Litsa fjord to Murmansk is a cooperation between the County Governor of Finnmark and the Russian Ministry of Defence’s Directorate for Oceanography and Navigation.

The waters in question don’t lack navigation marks today. This is Russia’s most important sea routes for the navy’s surface vessels and submarines. Murmansk harbour itself is one of the busiest in Europe.

“We are securing nuclear waste voyages and such dangerous cargo should have several navigation systems,” says Per-Einar Fiskebeck, Chief Engineer with the Office of the Finnmark County Governor. The Governor runs nuclear safety cooperation projects with Russia with grants from the Norwegian Foreign Ministry.

He confirms that the navigation marks to be bought will be owned and operated by Russia’s military Northern Fleet.

Norway suspended most bilateral military activities with Russia in March last year due to the annexation of Crimea and the use of armed force in Ukraine.

Voyages with spent nuclear fuel
Per-Einar Fiskebeck says to BarentsObserver that the plan is that Norway’s grants to the project will be signed into contract later in May.

Jarl Tuv, Senior Engineer with the Costal directorate Troms and Finnmark explains how the navigation marks will work and where to be placed.

“We aim at improving navigation safety for the nuclear waste transport vessels “Rossita”, “Imandra” and “Serebryanka” on the route from Andreeva Bay in the Litsa fjord towards Atomflot in Murmansk,” says Jarl Tuv.

Jarl Tuv shows the sea route to get new navigation marks to be paid by Norway. (Photo: Thomas Nilsen)

Two racons each come with a price tag of half a million Norwegian kroner. They will be placed in the part of the Kola Bay that are most important for navigation for the navy’s huge surface vessels sailing between Severomorsk and the Barents Sea.

Severomorsk is the Russian Northern Fleet’s main base and homeport to larger naval vessels like the nuclear powered battle cruiser “Pyotr Veliky” and other battle ships.

This slide shows where in the Kola bay the two recons (red), the lighthouses (yellow) and the light buoys (red and green) will be located. (Photo: Thomas Nilsen)

Additional three pairs of fare way systems with light buoys will be places in the fjord; north of Severomorsk, just outside Severomorsk and near the naval yard Roslyakovo between Severomorsk and Murmansk.

SIM-card transponders
In the Litsa fjord, seven pairs of light buoys will be placed, in addition to two leading lights and one new lighthouse. The Litsa fjord is home to many of Russia’s nuclear powered submarines, including the brand new “Severodvinsk” introduced to the fleet last autumn.

“There will be SIM-cards sending signals on the buoys and the captains on the vessels transporting nuclear waste will need codes for accessing them,” explains Per-Einar Fiskebeck. The navigation system own by the Northern fleet. 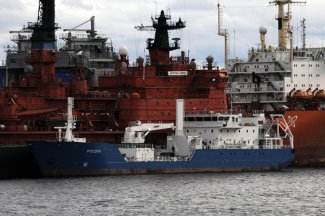 The most expensive part of the NOK 24 million investments are the buoys and lighthouses. In addition, the project includes detailed maps (1:5000) near the piers in Andreeva Bay and at Atomflot. Also, electronic chart display system for “Rossita” and “Serebryanka” are to be implemented.

Norwegian cash to Russian navy’s lights
Norway will also pay for the Ministry of Defence’s directorate for Oceanography and Navigation’s work on monitoring the condition of all 60 navigation lights along the sailing route. The route goes outside all the Northern Fleet’s nuclear powered submarine bases, like Vidyaevo and Gadzhievo where several of the multi-purpose submarines of the Oscar-II class and the strategic nuclear missile submarines of the Delta-IV class are based.

“Surface vessels can’t use the same navigation signals as submarines,” explains Fiskebeck underlining that this project can’t be seen as a support to Russia’s nuclear submarine fleet.

What about the navy’s surface vessels?

“I do understand why you ask that question, but our aim is to ensure safe transport of spent nuclear fuel from Andreeva Bay,” Per-Einar Fiskebeck explains.

Military capacities
Norway’s Foreign Ministry granted the first NOK 200,000 (€27,300) to a pre-study of the project three years ago. The money comes via the long-lasting Norwegian grant program for improvements of nuclear safety in Russia that so far has reached NOK 1,9 billion.

A condition for the nuclear aid grants has been that Norwegian money should not go to infrastructure possible to use to maintain the Russian Navy’s military capacities.

Andreeva bay is the Russian Northern Fleet’s largest storage facility for spent nuclear fuel from old submarines. The storage holds some 21,000 spent fuel elements and the plan is to start transporting them in special designed casks on board vessels to Atomflot next summer. From Atomflot, the servicebase of Russia’s nuclear powered icebreaker fleet, the casks will go by rail to Mayak, a reprocessing plant near Chelyabinsk in the South-Urals.