Controversial Russian journalist Dmitry Kiselyov at the TV program where he warned that Russia is the only country in the world capable of turning the U.S. into “radioactive dust.”

Putin’s chief propagandist and television host had already booked his fishing vacation to Gjesvær in Finnmark when EU included him on the visa sanction list, also followed by Norway.

“We have plans with the kids to take a trip to northern Norway by car from Murmansk. We have rented a lodge at the northern Viking settlement of Gjesvær with only 150 inhabitants, to show the children the midnight sun, bird-cliffs and seals. We have already sent advance payment,” says Dmitry Kiselyov in a longer interview with Izvestia on Friday.

Dmitry Kiselyov is a Russian journalist that in December 2013 was appointed by President Putin to be the head of the new official Russian government owned news agency Rossiya Segodnya (Russia Today). The agency was created out of former RIA Novosti and the radio station Voice of Russia.

Anti gay, anti oposition, anti West
Kiselyov is known for promoting Putin’s policies and denigrate the West. He once said in his TV-show “[Gays] should be prohibited from donating blood, sperm, … And their hearts, in case they die in a car accident, should be buried or burned as unfit for extending anyone’s life.”

Gjesværstappan islands are some of the most spectacular bird cliffs along the coast of western Finnmark. Dmitry Kiselyov is no longer allowed to bring his children here. (Photo: Thomas Nilsen)

He has called opposition activist and blogger Alexei Navalny for a “fifth columnist.”

Some weeks ago, Kiselyov posed in front of a nuclear mushroom cloud and warned that Russia is the only country in the world capable of turning the U.S. into “radioactive dust.”

“Norway restricts freedom of speech”
Dmitry Kiselyov is well-known among journalists in the Barents Region, including northern Norway. In the 90ies, he often met with colleagues across the northern borders to Scandinavia.

Barents Press, a network of journalists in Russia, Norway, Finland and Sweden covering the Barents Region, has invited the controversial Russian journalist to their up-coming annual meeting in Kirkenes in late April. The initiative to invite Kiselyov to the annual meeting on the Norwegian side of the border to Russia’s Kola Peninsula was taken last autumn, long before EU unveiled the sanctions list on March 20 this year.

“As a person that is 100 percent a friend of Norway falls under the Norwegian sanctions whose aim is to restrict freedom of speech. Great! I believe this is so far not very thought-through, ….. It’s against freedom of speech,” Kiselyov says to Izvestia.

“Refusing a journalist entry is absurd”
Barents Press Norway regrets that Kiselyov is denied entry to the country. The journalist network believes it will benefit everyone to include all views to be voiced in the debate about the conflict, also Kiselyov’s. 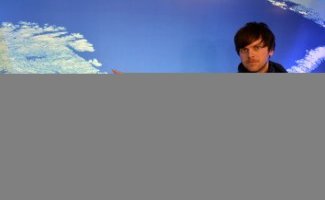 Norwegian journalist Amund Trellevik would very much like to see Dmitry Kiselyov in the debate at the Barents Press annual meeting later this month. (Photo: Thomas Nilsen)

“We would really like to see him at our annual meeting,” says Amund Trellevik, board member of Barents Press Norway to BarentsObserver.

“Yes, we are aware that he is a controversial person, but that is exactly why we invited him,” says Amund Trellevik arguing that closing the borders by denying a journalist entry is absurd.

“This is not the right way to respond to the Crimean crisis. Russia’s conflict with Ukraine and the cooling in east-west relations will be in the center of discussions at the Barents Press annual meeting where 130 journalists from the region will participate. Here, everyone’s voice should be heard.”

“West and Russia has switched roles”
In the interview with Izvestia, Dmitry Kiselyov says that to his memory this is the first time international sanctions have been imposed on a journalist.

“Russia and the West have switched roles and now Russia has become the main defender of democratic principles and freedom of speech,” says Kiselyov.

“This sets an unwelcome and dangerous precedent. It is in effect a betrayal of European values. If this precedent is normalized, if the journalistic community in Europe, America or any other country does not respond, it would mean that journalists consider this legal. This represents a dramatic turning point in Western civilization – to say that we no longer need freedom of speech or believe it is a core value. Moreover, the EU is not alone; it has the backing of the Norwegian parliament.”

Norway’s Embassy in Moscow says they have not received any visa application from Dmitry Kiselov, reports ABCnyheter.

Commenting on his visa status to EU [Norway is not a EU member, but a member of the Schengen visa regime], Kiselyov says that nothing official has been released.

“If I’m allowed to visit Europe on a business trip, it means that EU is backpedalling because it realized that it is barbaric to restrict the work of journalists. Europe put itself in an awkward position and had to explain and justify these sanctions. But if it’s true that I can travel to the EU in a professional capacity, even though EU officials have called what I do propaganda, Europe finds itself in a ridiculous, paradoxical position: If  I can work but not take a vacation, does that mean they don’t want a vacation to interrupt my propaganda? Doesn’t that seem schizophrenic to you?, Kiselyov asks.

Russia will not limit Western journalists
Russia’s Foreign Ministry is not planning to ban entry of journalists from EU, Norway or the U.S.

“Of course not. Russia is above this. We have been through periods when freedom of speech was violated in the Soviet Union. Under Stalin, for example. We have lived through the iron curtain. Strange as it might seem, we have now switched roles. Russia has turned into a beacon of freedom.”

The outspoken journalist continues: “I think we have swapped roles. Russia is the one promoting freedom of speech, not the West. A great tectonic, civilizational shift has occurred. In Russia, you can say whatever you want: there is a range of TV channels, the Internet is not blocked, and there are newspapers and radio stations to suit every taste.”