After a year´s break festival Barents Spektakel is back in Kirkenes. “Arctic Take Away” is the slogan for this year´s popular art and cultural festival.

The small border town of Kirkenes is simmering with action this week. The cultural festival Barents Spektakel and the Kirkenes conference gather locals and guests from far and near.

Barents Spektakel is a cultural-political cocktail with contemporary art, performances, literature, theatre, film, seminars and concerts as ingredients, spiced with current issues related to the Barents Region and the High North in general.

“The slogan “Arctic Take Away” reflects upon different ways of viewing the Arctic,” says Andreas Hoffmann, Art Director at Pikene på Broen, the Kirkenes-based company of art and curators and producers behind the festival. “I am fascinated by take-away mentality. The Arctic has for a long time been seen as a place where you come to take away food and natural resources. The mining industry, oil and gas, food export has become a part of our history. Is the Arctic a perpetual source for outsiders to dig in? For how long?”

The issue is especially important now in the times of sanctions and colder political climate between East and West. “Politics are taking a lot away from the Arctic because of the sanctions,” Hoffman says.

This theme will be explored throughout the festival through art exhibitions, theatre plays and performances, but also through political debates and seminars.

A popular part of the festival is Transborder Café, an informal concept, a theme based think tank, which brings together experts by involving the audience in an open discussion related to current political and cultural issues. The issues up for discussion this year are sanctions and their impact on the border area between Norway and Russia and the cooperation in the Barents region; China as Norway´s new neighbour as a consequence of the opening of the Northern Sea Route; and controversies around fish farming. 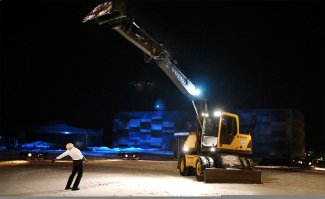 The festival´s opening show explored the dialogue between human and machine. Next to the mining company Sydvaranger´s separation plant for iron ore, the industrial noise, light and smoke set the background for the French artist group Beau Geste´s poetic performance of a digger and a dancer.

From Tromsø to Russia with silent film concert

August 9th, the Barents Region celebrated the UN International Day of the World’s Indigenous Peoples. The day was commemorated in several parts of the region, including Karasjok in Northern Norway and Teriberka in Northwestern Russia.

Sports in the Barents region have joined forces and established Barents Games. This weekend athletes from all over the region met in Oulu to compete in 14 differents sports during the Barents Summer Games. See our slide show from the competitions.